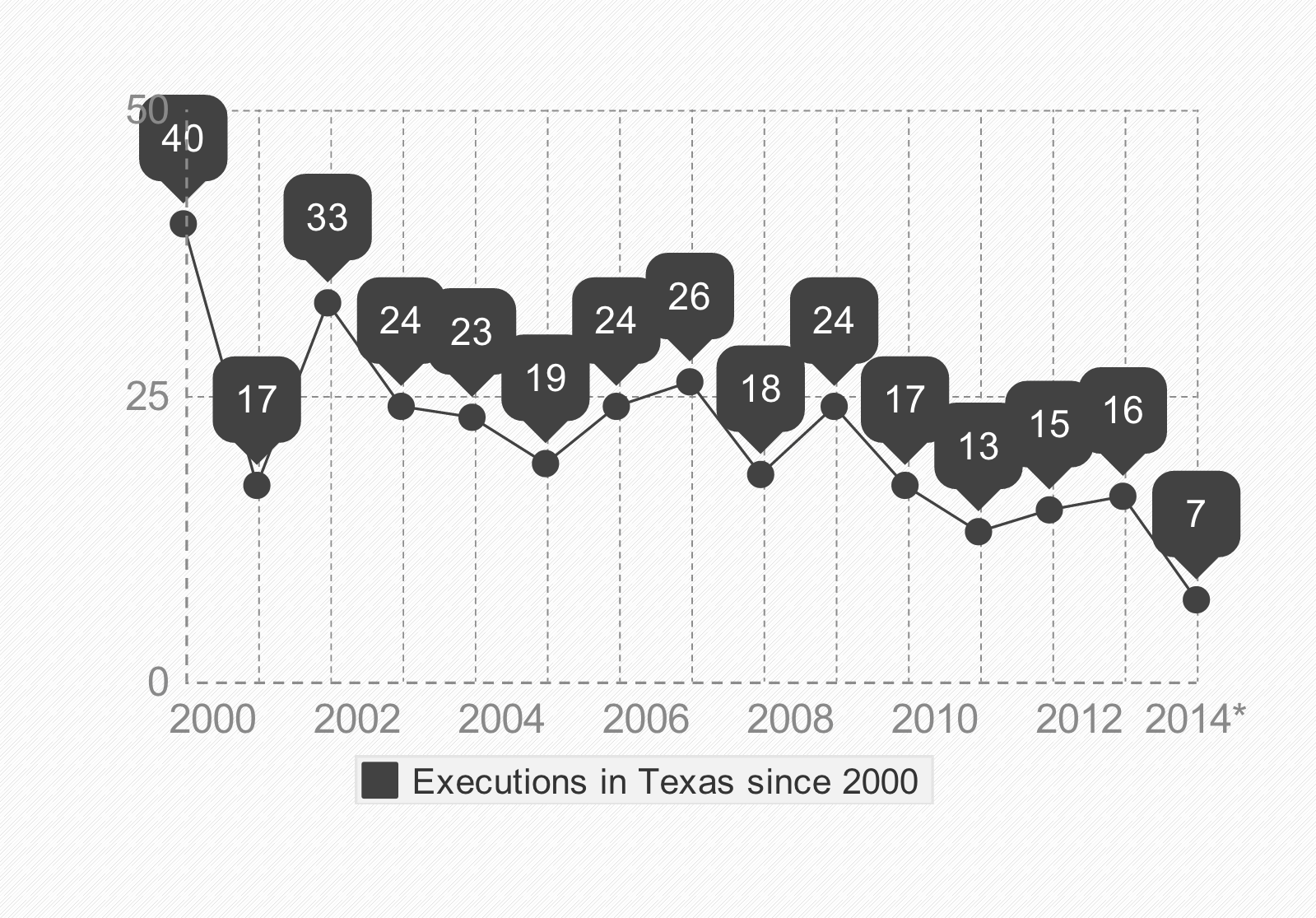 The first death penalty to take place happened in 1608 in Jamestown, Virginia. The recipient of this punishment was Captain George Kendall who was executed for being a spy for Spain. Punishment by death was common in Europe at the time. Several executions took place in the various colonies in the early and mid-1600s.

Death penalty reform began early on in the United States. Thomas Jefferson introduced a bill to revise Virginia’s death penalty law to reserve the penalty for crimes of murder and treason. His bill was defeated by one vote, but it was an early indicator of a country headed towards limitations on the death penalty. Some states abolished the use of the penalty all together while others limited its application to fewer crimes.

In Texas, the earliest form of execution was by hanging. This eventually gave way to the firing squad. Between 1924 and 1964, all executions in Texas were by the electric chair in the Texas state prison facility known as the “Walls Unit” in Huntsville. In 1964, court challenges to existing death penalty legislation stopped the imposition of the death penalty. The challenges culminated in the United States Supreme Court decision in Furman v. Georgia.

Furman v. Georgia (1972): In Furman v. Georgia, the Supreme Court held that the arbitrary and inconsistent imposition of the death penalty violated the Eighth and Fourteenth Amendments and constituted cruel and unusual punishment. While there is no clear majority opinion in the case, several justices voiced concerns about discriminatory sentencing in death penalty cases.

…if any basis can be discerned for the selection of these few to be sentenced to death, it is the constitutionally impermissible basis of race.

This case made state legislatures and Congress reform death penalty legislation to limit the arbitrariness in the sentencing process. Furman’s effect was a temporary prohibition against use of the death penalty.

Revival of the Death Penalty

Gregg v. Georgia (1976): The appellants in this case wanted the Supreme Court declare the death penalty unconstitutional once and for all. They argued no matter how the death penalty was applied, it constituted cruel and unusual punishment due to a lack of rational standards on when it should and should not be imposed. However, by 1976, most states had already changed their death penalty laws to comply with Furman. Legislatures mandated specific factors and procedures when imposing a death sentence, thereby removing the arbitrariness and discrimination in the evaluation of the death penalty in trial.

The Court held that capital punishment is justified in society based on moral outrage of certain conduct by offenders. The death penalty was found to be an extreme, yet suitable sanction, for extreme crimes.

The imposition of the death penalty does not, automatically, violate the eighth and fourteenth amendments. If the jury is furnished with standards to direct and limit the sentencing discretion, and the jury’s decision is subjected to meaningful appellate review, the death sentence may be constitutional. If, however, the death penalty is mandatory, such that there is no provision for mercy based on the characteristics of the offender, then it is unconstitutional.

Gregg developed a two-part test for the imposition of the death penalty to be constitutional. First, the scheme developed by the legislature and used in trial must provide objective criteria to direct and limit the death sentencing discretion. Second, the scheme must allow the judge or jury to take into account the character and record of an individual defendant.

Coker v. Georgia (1977): The appellant in Coker had escaped from prison in Georgia and then raped a woman before stealing her car in an attempt to get away. After the Furman decision, Georgia was the only state that allowed the death penalty to be a punishment for the crime of rape at the time of this case. On appeal, the Supreme Court held that, “The sentence of death for the crime of rape is grossly disproportionate and excessive punishment and is therefore forbidden by the eighth amendment as cruel and unusual punishment.”

Death Penalty Cannot be Used in Punishment of Mentally Retarded

Atkins v. Virginia (2002):The appellant was arrested for abducting two individuals, robbing them, and then killing one. The jury found Atkins guilty and sentenced him to death. During the punishment phase of the trial, Atkins’ school records were entered along with his IQ test results. Atkins’s IQ was 59. The defense expert witness, a clinical physician, provided testimony that an IQ of 50 would put him in the category of those who are labeled “mildly mentally retarded.”

The Supreme Court held that the imposition of the death penalty on an individual who was mentally retarded violated the Eighth Amendment’s prohibition of cruel and unusual punishment concluding that such punishment is excessive, and the Constitution “places a substantive restriction on the State’s power to take the life” of a mentally retarded offender.

Roper v. Simmons (2005): This case involved a 17-year-old Missouri native who was found guilty of murdering a victim he abducted, bound and threw in a river. On appeal, the Supreme Court held that it was cruel and unusual to execute a person who was under the age of 18 at the time of the murder. This case broadened the 1988 Supreme Court case, Thompson v. Oklahoma, which restricted the imposition of the death penalty in cases involving defendants under the age of 16.